Strategic CS Ops teams are the backbone of a proactive Customer Success function.

The average CS Ops team is focused on delivering a more efficient Customer Success operation. Often the scope of the team includes tools, processes, reporting, and forecasting. But for CS to play a more prominent role in the company, the CS Ops team must evolve to own both operations and strategy.

That future of Customer Success, which we refer to as 2.0, requires leaders to spend less time on running a better Success team and instead focus on using customer data to run a better company.  That means arming other executives with the customer data they need to make better decisions (pricing, ideal customer profile, product roadmap, content, etc), which will lead to the biggest improvements in retention improvement.

Without a mature CS Ops function, the CS leader is left with anecdotes, NPS, usage data, and health scores to drive decisions, which most other execs will ignore.

So in this article we’ll explore how a CS Ops team matures, including reporting structure, scope of ownership, and metrics—and we hope to inspire you with 1-2 things you can do this quarter to level up your CS Ops team.

What should CS Ops own?

CS Ops is the team that provides standardization, intelligence, planning, and ultimately strategy for Customer Success.

We interviewed 30+ companies of different sizes to create the table below. This represents the broad scope of potential responsibilities of your CS Ops team. Later we’ll discuss how CS Ops increases responsibilities as it matures—with the aspiration of adding “Strategy” to the most advanced teams. 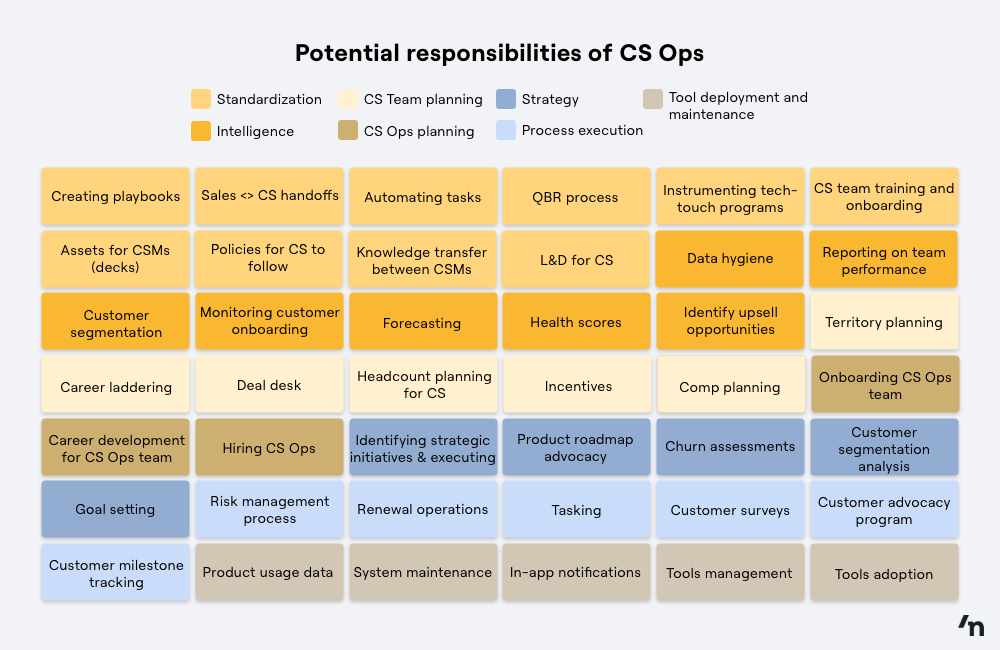 Most CS Ops teams follow a similar path as they mature: the team is born out of a specific CS need, they begin taking on more responsibilities, and then they take action to become proactive.

Where should CS Ops report?

Most companies have one of three structures: CS Ops reports under the CRO, the COO, or the CCO. Before we share a path for deciding on reporting structure, here are some of the common arguments for and against each scenario.

Note: CS Ops is increasingly centralized under a RevOps function that includes Sales Ops, Marketing Ops, and CS Ops. For this article, we’ll focus on which executive owns this Ops group.

If CS Ops isn’t a part of RevOps, you can model your CS Ops reporting structure by comparing it to your Sales Ops team. For example, if Sales Ops reports to the CRO, then CS Ops should report into the CCO. 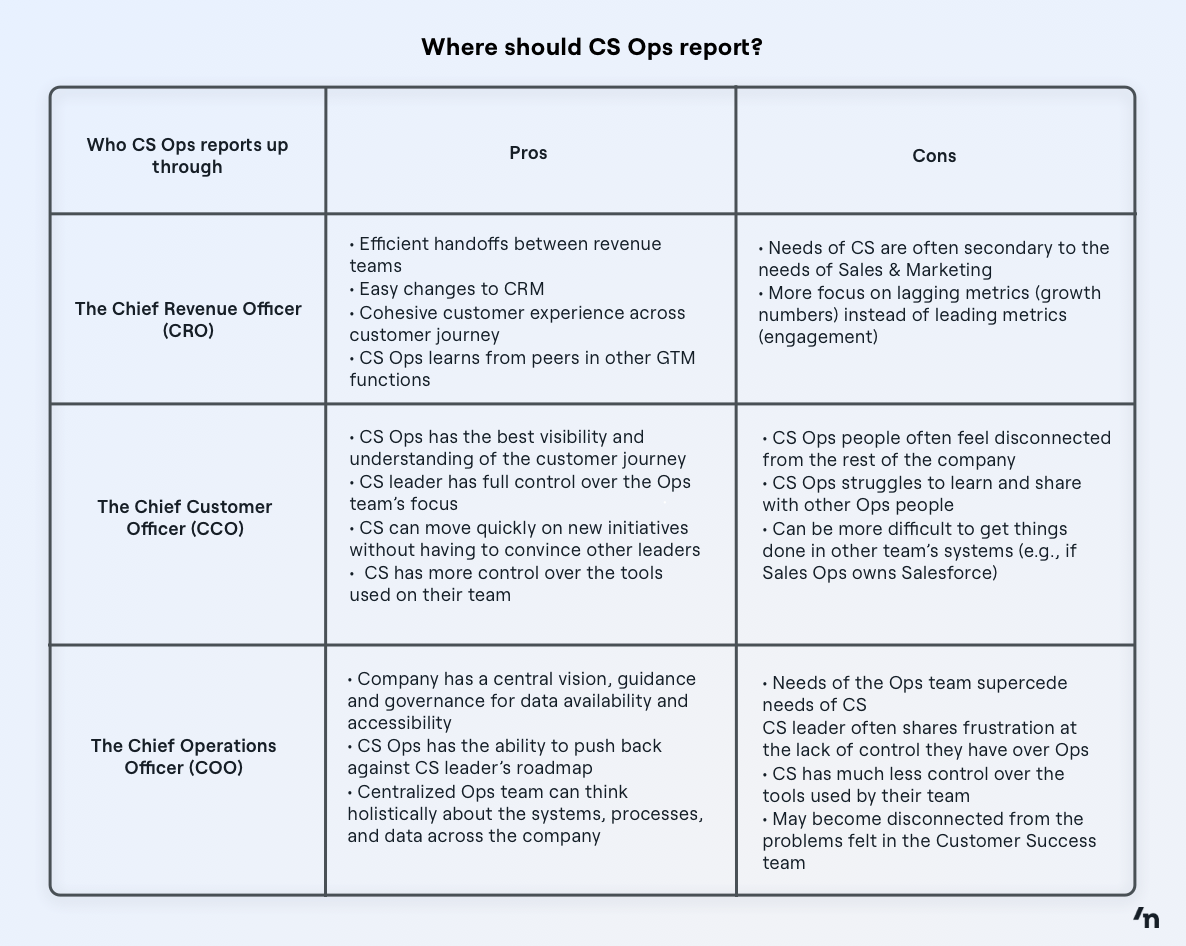 If under the CRO or COO, this usually means Ops is centralized under a RevOps or company-wide Ops team. A prominent argument for having a centralized Ops function is the holistic business view it provides: instead of being siloed within Customer Success, CS Ops in a centralized team has visibility into what’s working for other teams. They can also easily work with other Ops members to ensure the handovers between teams are efficient.

You’ll hear more arguments against having CS Ops report to the CRO than the COO. Oftentimes if CS Ops is nested under Sales, the team “shares” responsibilities with Sales Ops…. And inevitably the Customer Success team’s tasks will not be the first priority. The obvious solution is to have clearly defined responsibilities between CS Ops and Sales Ops. Still, if RevOps reports to the CRO then the CRO has final say over their roadmap. And unless other agreements are made, the CCO simply doesn’t have full control.

When reporting to the COO, you’ll usually see a structure where CS Ops reports into the COO but has a dotted-line matrix structure to the CCO. In this case, CS Ops straddles both the operations and CS teams. This encourages 1) the freedom to advise CS without fear and 2) alignment between CS Ops and CS, whom they serve.

Another advantage of reporting to the COO: the needs of CS Ops (such as resourcing or program spend) can be highlighted to both the CCO and COO, thus creating more visibility.

One other strong argument for *not* having CS Ops report into Customer Success is the ability for CS Ops to push back on the priorities of the CS leader. They might want to push back because the CS leader has unrealistic expectations of what’s involved in a project, or CS Ops sees other initiatives as having a greater impact on the team and company. Not reporting into the CCO gives CS Ops the ability to be a thought partner to the CCO.

A counterpoint to that argument: “A good CS Ops leader should be able to push back on the CS leader’s strategy, even if they report into CS.” We can talk theory all day but common sense says it’s easier to debate with someone who is not your boss.

Three points usually surface when arguing for having CS Ops reporting to the CCO:

CS Ops people that report into the CCO generally say that they wish they could learn from other Ops people at the company. They feel like their personal growth is limited. And since other Ops teams are also overloaded, it’s slow/difficult to make changes in systems owned by those teams (e.g. Sales Ops owns SalesForce).

CS usually hires the first Ops person when there’s a specific problem, like implementing a CS tool, that needs to be solved (more on the “stages” of Ops below). It makes sense for the team to stay nested within Customer Success as it begins to grow: it’s taking on more operational and tactical work based on specific needs the team sees within CS.

How does CS Ops mature?

CS Ops is often born out of the need to implement tooling. The first CS hire might be able to band-aid together the software they need, but at a certain point the job requires a greater investment.

Most CS Ops teams own “data and systems administration” because that’s the first and foundational part of their role. They can’t be strategic if things are breaking; the team must be sure that the right tooling and data infrastructure is in place so CSMs can do their job.

Some CS Ops teams at this stage will have already started doing some strategic activities, like proactively reporting on customer risk or CSM performance so CS leaders know where to focus their attention.

Once the “acute need” has subsided, the team will start taking on a growing amount of responsibilities. Whenever someone asks, “Could someone help me with this?” Ops is the go-to. Updating the health score calculation, training CSMs, or configuring in-app notifications for tech-touch programs are all examples of tasks that start overloading the CS Ops team.

The tendency in this stage is to become reactive; “the everything department.” As CS Ops grows, they must stay focused on the responsibilities they can and cannot take on, and create a planning process for larger initiatives.

Editor’s note: We stole “the everything department” phrase from Rav Dhaliwal (Venture Partner at Crane). Thanks, Rav!

There are 4 areas of responsibility that CS Ops may take over in stage 2:

There are two major changes required to move a CS Ops team from Stage 2 to Stage 3. The team needs to move into a centralized Ops function that reports to the COO, and they must add “strategy” to their responsibilities.

Moving CS Ops to a centralized Ops team under the COO

A fully mature CS Ops team serves as a strategic thought partner to the Customer Success leader. At this point they tend to report into a centralized Ops function under the COO for two reasons:

There is one downfall here: pulling CS Ops out of the CS team into a centralized function means that Enablement can no longer live within the Ops team’s scope. Even if the team is “embedded” in CS by way of meetings, they’re no longer the experts in CS and so enablement needs to be passed off. By this time, CS usually invests in a dedicated Enablement team that lives within the Customer Success department.

Note: This is when it becomes especially helpful for CS Ops leaders to have a background in CS. The more CS Ops can intuitively understand what their CS leader is thinking, the tighter that alignment will be.

Adding “strategy” to the team’s scope of responsibility

While a Stage 2 team asks, “How can we make the CS team ‘run better’?’” the Stage 3 team asks, “What can we do to move the needle on our goals?” The focus is still on improvement, but it’s more about identifying opportunities and placing bets than just iterating on how the team currently works.

Stage 3 CS Ops teams enable CS leaders with the data they need to drive decisions across the company. For example, they might:

The analysts on the CS Ops team must have a working knowledge of statistics to find the signals within the noise.

They use data to provide strategic recommendations to the CS leader. And then depending on the project, they may also be the team executing on the recommendation. For example, we’ve heard of teams who incorporate “strategic bets” in their annual planning — these “bets” are the projects that vary most year over year. 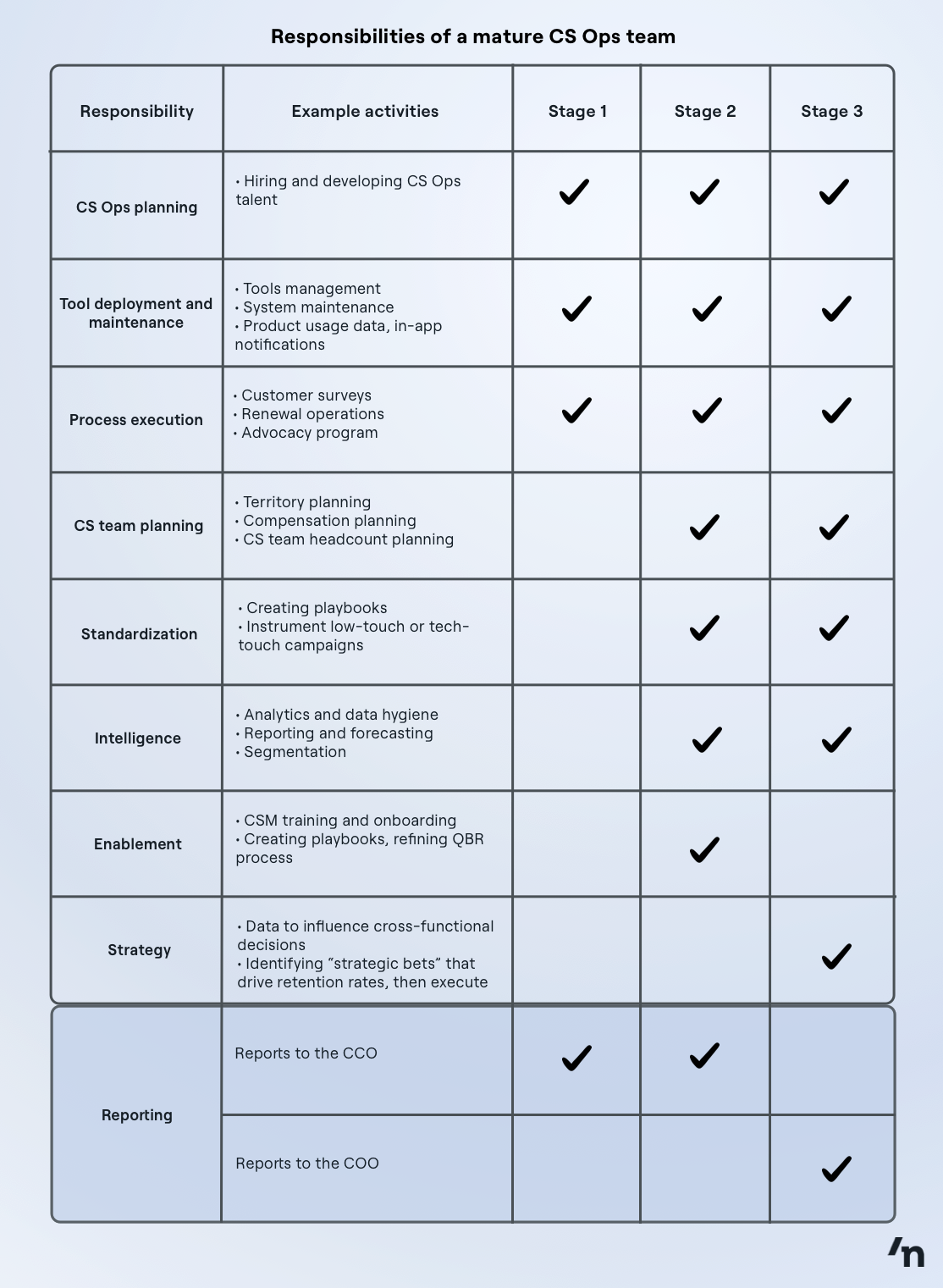 2. Calculate cost savings to quantify the ROI of initiatives

Calculating cost savings works for any project that reduces the amount of time spent on recurring tasks.

We asked a handful of CS Ops leaders: What’s a tactical win you’ve done that everyone should consider doing?

Here were some of their responses:

But they also need to become a strategic advisor to the CS leader to be a mature CS Ops team. And that shift happens by: 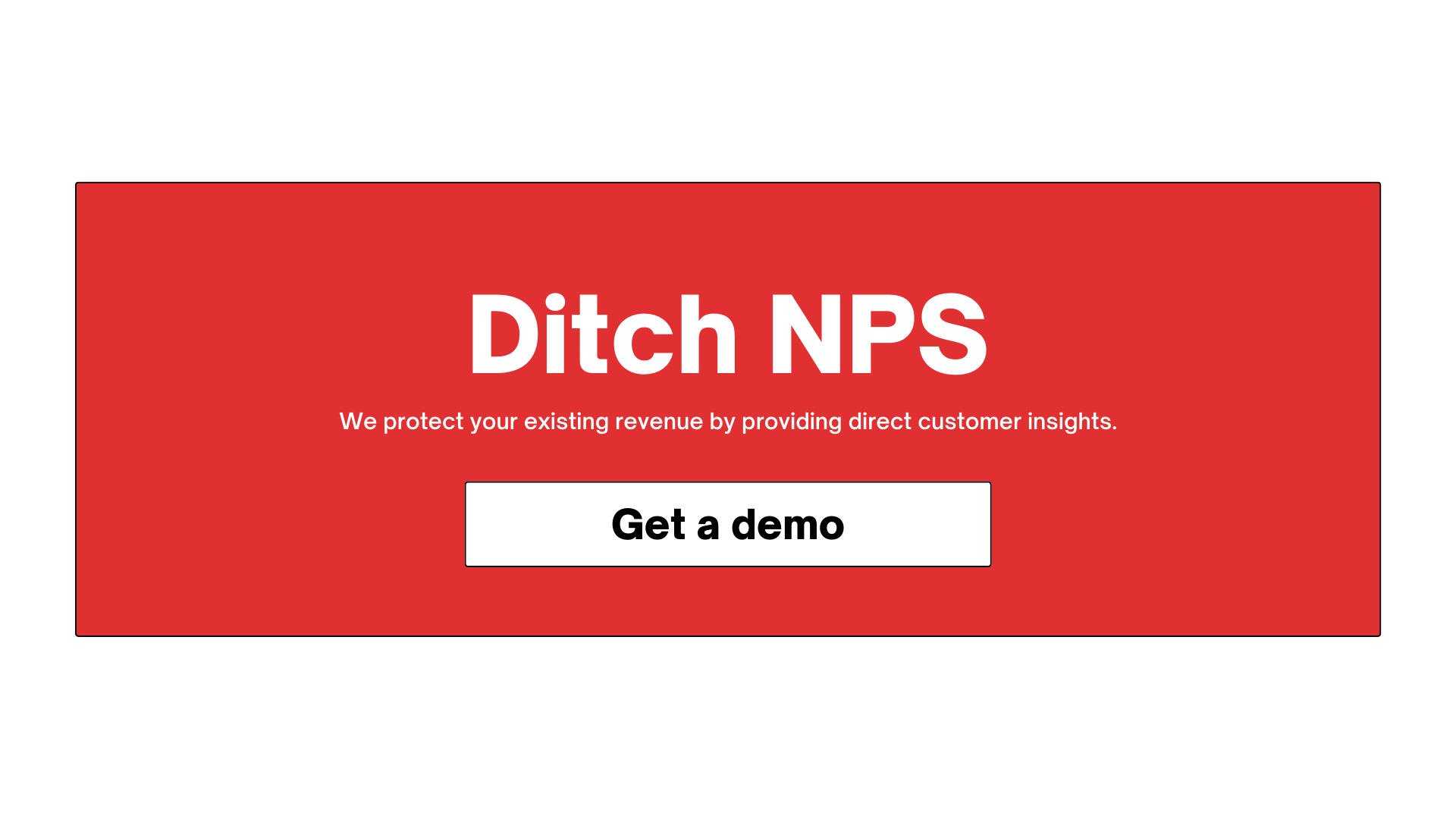